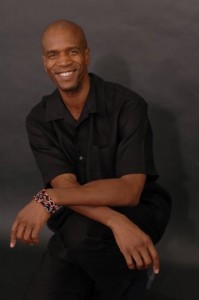 Kevin Iega Jeff began studying dance formally at age thirteen.  He trained at the Bernice Johnson Cultural Arts Center, New York City’s High School for the Performing Arts, Darvash Ballet School, and the Alvin Ailey American Dance Center before matriculating into The Juilliard School.  As a dancer he has been praised for his technical brilliance and rigor, his dramatic power, and the singular ability to perform and bridge different dance forms in a seamless manner, whether it be ballet, modern, contemporary, or African American dance.
At the age of twenty one, Iega founded his first company, JUBILATION! Dance Company in New York City.  JUBILATION! was created out of a need to provide a forum for African-American artists to be nurtured holistically through the arts.  For ten years the company toured nationally and internationally, helping to bring the stories, histories, and art of the African American people as well as his unique approach to contemporary dance to a global audience.While continuing to perform as a dancer, it was at JUBILATION! that Iega began his life long pursuit of both choreographing new work and directing a company that would train a new generation of dancers and choreographers.  In 1994, he left New York to take up an appointment as Artistic Director of the Joseph Holmes Chicago Dance Theater.  In 1995, he co-founded Deeply Rooted Productions in Chicago where he continues to serve today as Artistic Director.  As a choreographer, Iega has created more than fifty works, ranging from solos to large-scale company dances, where he pushes contemporary dance to take cognizance of different voices and aesthetics. He primarily creates for Deeply Rooted, but also continuously receives commissions by other companies to create new works for them, such as the Alvin Ailey Dance Ensemble, River North Dance Company, Dallas Black Dance Theater, the Cleveland Contemporary Dance Theater, Cleo Parker Robinson Dance Ensemble, and the Wylliams/Henry Danse Theatre.In 2005, Iega was named as one of the Juilliard School’s 100 Outstanding Alumni in celebration of the school’s centenary anniversary.  Among his other awards are those from the National Endowment for the Arts, the National Council for Culture and Arts, and the BTAA Best Choreography award for Church of Nations. He received a Merit Award from the International Association of Blacks in Dance, and joined their Board in January 2006.  Most recently, Iega was awarded the 2009 Chicago Dance Makers Forum Grant to support the creation of I Am Deeply Rooted, which premiered in the Spring of 2010.Iega has served as artist-in-residence at Howard University, the University of Las Vegas, Goucher College, SUNY Purchase and at Purdue University’s Black Cultural Center. His work has been featured in several films, including Spike Lee’s She’s Gotta Have It, and in the Broadway shows Comin’ Uptown and The Wiz.  Iega’s Walls premiered at the 1996 Olympics in Atlanta, GA.  In 2003, Iega and Deeply Rooted Dance Theater Associate Artistic Director Gary Abbott co-choreographed Jagged Ledges, featuring Tony Award-winning spoken word artist Staceyann Chin. In 2006, he and Abbott were commissioned to choreograph Three Brazilian Dances for the Chicago Sinfonietta, which premiered at Chicago’s Symphony Hall.
As Iega reflects on fifteen years at Deeply Rooted, he states: “I want my work to grow truer, more focused, and relevant over time.  My art is born out of human examination, and my desire to communicate authentically informs what I create. For me dance is a perfect catalyst. It reveals the inner voice, reflecting who we are and who we strive to become.”