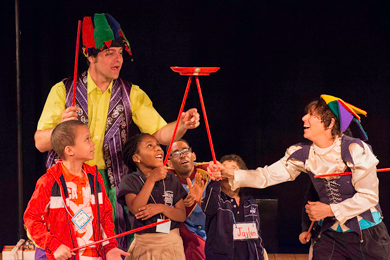 The Tale of the Tongue-Tied Prince

A troupe of traveling actors shows up at the theater just in time to perform one of their favorite stories: “The Tale of the Tongue-Tied Prince.”

Throughout the show, the performers use a wide range of their special performance skills, including juggling, beat-box rapping, music and magic to solve the mystery of how the Prince came to have this evil curse cast upon him.

With the King’s leadership and audience interaction, the mystery is solved and everyone learns an important life lesson in the closing song: “Everything You Do Comes Back to You.” The whole kingdom then celebrates with more fantastic displays of their amazing skills.

“The show was fantastic!  I got to spin a plate and learn some cool magic tricks. The story about the prince who lost his voice was hilarious.  Everyone was laughing!”
Daniela – elementary school student